We’ve heard it before – women, people of color, poor or working-class people, migrants, persons with disabilities – presumed incompetent until they “prove” themselves to the powers-that-be or their mainstream peers. This is no less true in the rarified atmosphere of academia. 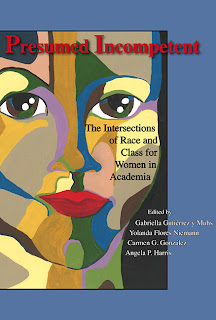 Tenure-track law professors, for example, are some of the most privileged members of the academy in terms of salary, visibility for their research, and security of position. Yet, many of them, and their non-tenure-track or humanities peers, still face the bias and discrimination (by intention or effect) experienced by marginalized groups in the broader society:
► Barriers to entry (including litmus tests irrelevant to teaching or scholarly potential, lack of pre-application mentoring and information about formal and informal requirements);
► Tracking to the low-pay, low-benefits, or low-recognition positions, or official failure to acknowledge the importance of the work teachers in these positions do for students and to legal education in general;
► Lowered expectations and even hostility among students, as compared to the respect shown to senior mainstream colleagues;
► Higher expectations that they will have extra time and resources to mentor students and colleagues from marginalized groups (rather than encouraging, acknowledging, and counting such work as important aspects of the educational enterprise);
► Invisibility or marginalization in faculty governance;
► Seemingly elusive promotion and tenure standards;
► Alienation from their communities or personal experiences; and
► The silence or overt complicity of colleagues in the problems above.
So, what can women of color who seek to enter and flourish in academia do?
In addition to locating allies among mentors, professional networks, and friends who can provide supportive advice and feedback, they can weigh the narrative experiences of those who have come before. They can also seek out the work being done by others in their fields. IntLawGrrls often serves such a role. See, for example, our “Experts at Law” series on women international law experts.
A new collection, Presumed Incompetent: The Intersections of Race and Class for Women in Academia (Utah State University Press 2012), aims to provide just such a resource. Co-editors of the collection are: Dr. Gabriella Gutiérrez y Muhs, Associate Professor of Modern Languages and Women’s Studies, Seattle University; Dr. Yolanda Flores Niemann, Senior Vice Provost and Professor of Psychology at the University of North Texas; Carmen G. González, Professor of Law, Seattle University School of Law; and Angela P. Harris, Professor of Law, University of California, Davis.
As summarized by the publisher’s website:

‘Presumed Incompetent is undeniably a path-breaking account of the intersecting roles of race, gender, and class in the working lives of women faculty of color. Through personal narratives and qualitative empirical studies, more than 40 authors expose the daunting challenges faced by academic women of color as they navigate the often hostile terrain of higher education, including hiring, promotion, tenure, and relations with students, colleagues, and administrators. The narratives are filled with wit, wisdom, and concrete recommendations, and provide a window into the struggles of professional women in a racially stratified but increasingly multicultural America.’

The new book is a welcome addition to resources on teaching for underrepresented groups, such as the bibliographies available on the Society of American Law Teachers (SALT) New Teachers’ Pipeline page and the network provided by the American Society of International Law International Disability Rights Interest Group.
Since I’ve been collaborating with several colleagues on disability rights projects lately (prior posts), I also highlight here other resources for current or potential law teachers with disabilities:
► Carrie Basas, “The New Boys: Women with Disabilities and the Legal Profession,” 25 Berkeley Gender L.J. 101 (2010).
► “Inaccessible Justice: Persons with Disabilities and the Legal System,” by IntLawGrrls contributor Stephanie Ortoleva, published at 17 ILSA J. Int’l & Comp. L. 281 (2011).

► Lawyers, Lead On: Lawyers with Disabilities Share Their Insights, edited by Carrie G. Basas, Rebecca S. Williford, & Stephanie L. Enyart (American Bar Association, 2011). Book available for purchase (discounted for law students with disabilities) here. In this book, see especially, on the subject of intersectionality and disability in law teaching:
►► “Dear Heart . . .,” by Zanita Fenton, beginning at page 67; and
►► “To My Sisters-in-Law (Teaching): A Critical Race Feminist Perspective,” by yours truly, Hope Lewis, beginning at page 58.