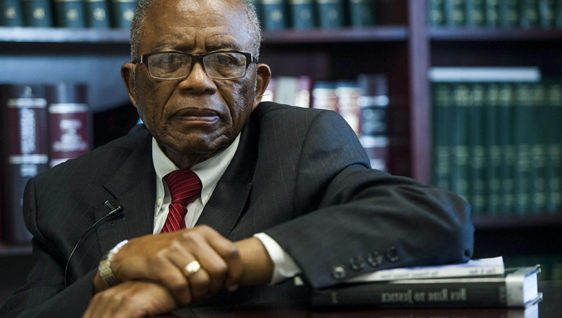 Tuesday, January 12, 6pm EST
FREE and open to all
Online via Zoom: click here to register

In 1958 Dr. King called him “the brilliant young Negro who later came chief counsel for the protest movement.”

Fred Gray opened his law practice in Montgomery, Alabama in 1954 with the mission of “destroying everything segregated I could find.”  One year later, this rookie lawyer represented his friend Rosa Parks and Dr. King in the Montgomery Bus protests.  That led to a career of landmark cases defeating segregation throughout Alabama, including the Supreme Court case of Gomillion v. Lightfoot, in which the Court rejected the racial gerrymandering of Tuskegee.

In his autobiography, Bus Ride to Justice, Gray also describes his representation of Claudette Colvin, the 15-year-old who was arrested on a Montgomery bus nine months before Rosa Parks; his securing an acquittal of Dr. King by an all-white jury in Montgomery of criminal charges of tax evasion; his role in investigating the infamous “Tuskegee Syphilis Study” and securing compensation for the numerous victims; and many other historically significant matters.  In this conversation, you’ll hear Mr. Gray talk about the judge whom in 1958 he complimented for being a fair judge who treated him courteously, and who went on to become the governor of Alabama–Governor George Wallace.

Mr. Gray will be interviewed by OLLI instructor and speaker Doug Mishkin, himself a lawyer.  OLLI is pleased to offer this 90-minute free program on Tuesday, January 12, 2021 at 6:00pm Eastern/5:00pm Central time.  We can think of no better way to honor the memory of Dr. King in anticipation of the January 18 Martin Luther King Day than to celebrate the achievements of his lawyer, Fred Gray.