Daina Ramey Berry, Ph.D., Associate Professor of History at the University of Texas, Austin, and Deleso A. Alford, Associate Professor of Law at Florida A&M University College of Law, have co-edited what looks to be a groundbreaking new collection of essays on slavery, entitled, Enslaved Women in America: An Encyclopedia (Greenwood, 2012).
New scholarship on the lives and contributions of African-American women is a very welcome addition for legal historians and interdisciplinary scholars given the current scarcity of documented information. IntLawGrrls have celebrated foremothers such as Sojourner Truth and Harriet Tubman, but we know that so many others were silenced or intentionally erased from memory. Their legacy remains important in understanding contemporary domestic and international debates.
As outlined in the book flyer: 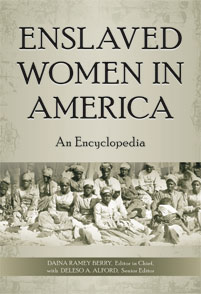 ‘Slavery in the history of the United States continues to loom large in our national consciousness, and the role of women in this dark chapter of the American past is largely under-examined. This is the first encyclopedia to focus on the daily experiences and roles of female slaves in the United States, from colonial times to official abolition provided by the 13th amendment to the Constitution in 1865.
‘Enslaved Women in America: An Encyclopedia contains 100 entries written by a range of experts and covering all aspects of daily life. Topics include culture, family, health, labor, resistance, and violence. Arranged alphabetically by entry, this unique look at history features life histories of lesser-known African American women, including Harriet Robinson Scott, the wife of Dred Scott, as well as more notable figures.’

The new collection should be a rich resource for making the previously invisible, or marginalized, voices of women who were enslaved more central for historical and contemporary legal studies.