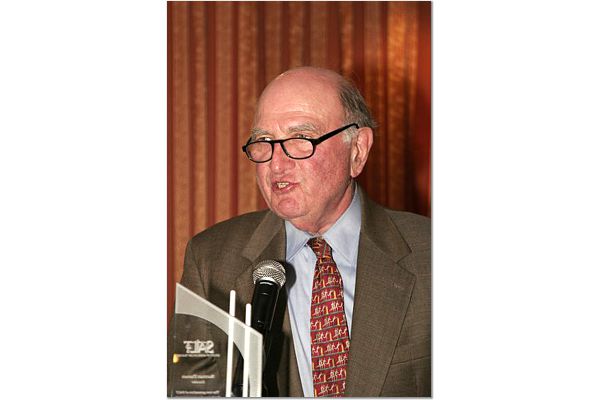 Founder of SALT, NYU School of Law Legend, Former General Counsel and President of the Board of the ACLU, Civil Liberties Giant, Social Justice Visionary, and Friend

The Founding of SALT

Thirty-five years ago, Norman Dorsen created the Society of American Law Teachers, dedicated to justice, equality, excellence and academic freedom. He appreciated that law teachers could act and speak more boldly than law schools. He also understood that an organization should include, not just professors, but the many professionals who make significant contributions to legal education without the title of professor. Plus the acronym—SALT—is cool! In creating SALT, Norman recruited people from diverse political perspectives, from schools that were elite and modest, young and old, and superstars and worker bees. For decades, SALT has been the largest membership organization of law teachers in the world. SALT has flourished as the result of Norman’s brilliant vision and guidance.

In 2001, Norman offered SALT $60,000 to be matched by our contributions to create a fellowship to fund law student work. It was a magnificent gift, which forced us to match not just Norman’s money, but his vision. We have now matched his money and are about to hire the first Dorsen Fellow.

SALT is only one of the many institutions and communities that Norman has created and nurtured. In May 2008, the Arthur Garfield Hays Program will celebrate its 50th Anniversary. Norman has been the Director of the Hays Program since he came to NYU Law School in 1961. He appreciated the value of an endowed program, independent of law school financing. He raised the money to make the program financially independent and then offered fellowships to leading civil liberties lawyers. Under his leadership, the Hays Program has trained and continues to nurture the next generation of civil rights and liberties lawyers as well as those who have made their mark in the past half century. Because it is small, the Hays Program is a true community.

Norman’s influence in making the American Civil Liberties Union (ACLU) and the concept of civil liberties a major force in the United States and the world cannot be understated. From 1969 until 1976, he served as General Counsel to the ACLU. For many of those years, the ACLU had only one or two paid professional staff. Norman did the work. As a law professor at NYU Law School, he had the opportunity to file briefs in all of the important civil liberties cases before the United States Supreme Court and presented oral argument in many of them: Gideon, Fast, Levy v. Louisiana, Roe v. Wade, the Pentagon Papers, and the Nixon Tapes. And many, many more that are not household names, but which affect our daily lives.

In 1976, Norman shifted roles at the ACLU, becoming President of the Board. He led the organization through challenges, most seriously the question whether civil libertarians should defend the right of Nazis to demonstrate in Skokie, a community that included many Holocaust survivors. Norman also led the ACLU through a process of expanding the concept of civil liberties to include gender discrimination, reproductive rights, immigrants’ rights, and the rights of gay people.

Norman’s influence in making human rights an international issue also cannot be understated. When he was Dean of NYU Law School, John Sexton tapped Norman to create a world class global program. From 1996 until 2000, he served as the Chair of the Board of the Lawyers Committee for Human Rights. In 1996, these international experiences led Norman to create the U.S. Association of Constitutional Law, an affiliate of the International Association of Constitutional law.

Norman’s influence on NYU Law School is wise and pervasive. Many of NYU’s governing documents bear the names of committees he chaired. For decades, deans have given Norman the hard jobs, and he has done them well.

In 2007, the AALS gave Norman the Award for Lifetime Contributions to the Law and Legal Education, an award that Norman particularly appreciates. The AALS did not commit to make this a regular, annual award. The AALS understands that Norman is special.

Certainly his institution-building contributions are unique. But Norman’s capacity and willingness to connect with people makes him extraordinary.

SALT thanks Norman Dorsen for this vision, his determination, and his commitment to law, justice, and equality. 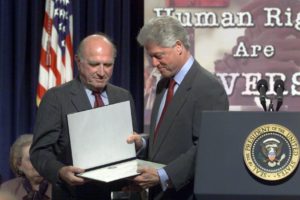