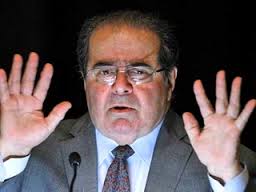 An antihero, according to the Oxford English Dictionary, is “One who is the opposite or reverse of a hero; esp. a chief character in a poem, play, or story who is totally unlike a conventional hero.”

Since 2003, legal restrictions on gay rights have been falling like dominoes. There have been many heroes in that struggle, from plaintiffs, to lawyers, to average LGBTQ people and their families struggling with the legal system.

Another image that might fit Scalia is Cassandra. The OED again: “A daughter of Priam, sought in love by Apollo, who gave her the gift of prophecy; when she deceived him he ordained that no one should believe her prophecies, though true.”

Whether Scalia is an antihero or a conservative Catholic Cassandra–and, keeping the intentional fallacy in mind, whether he wanted or intended to or not–he has had a real, positive impact on same-sex marriage jurisprudence in 2013.

While Shelby’s order in Kitchen v. Herbert isn’t all Scalia, it does start there. Shelby quotes Scalia in his analysis before he cites to any other cases.

In my opinion, however, the view that this Court will take of state prohibition of same-sex marriage is indicated beyond mistaking by today’s opinion. As I have said, the real rationale of today’s opinion . . . is that DOMA is motivated by “bare . . . desire to harm” couples in same-sex marriages. How easy it is, indeed how inevitable, to reach the same conclusion with regard to state laws denying same-sex couples marital status.

Shelby uses this quotation as warrant for an easier standard of review–strict scrutiny–than he actually applies. A “bare… desire to harm” is not rational basis, but animus, and hence deserving of strict scrutiny.

… And Justice Scalia even recommended how this court should interpret Windsor decision when presented with the question that is now before it:

“I do not mean to suggest disagreement… that lower federal courts and state courts can distinguish today’s case when the issue before them is state denial of marital status to same-sex couples.”

This, even stronger than Shelby’s first quotation–the res ipsa loquitur of “concurring dissent.” Does it matter that Scalia means it in a negative way, and was actually writing in dissent?

Lord [sic], an opinion with such scatter-shot rationales as this one (federalism noises among them) can be distinguished in many ways. And deserves to be. State and lower federal courts should take the Court at its word and distinguish away.

In his order in Kitchen, Shelby begins with and relies on Justice Scalia’s dissent in Windsor. But Shelby continues with his own analysis. Shelby does show that the one Supreme Court case directly on point, Baker v. Nelson (1971), a summary reversal, is essentially meaningless after the Supreme Court’s ruling on Proposition 8 was based on standing, not lack of a federal issue. He anchors his analysis in the right to marriage as an unenumerated privacy right under Griswold v. Connecticut. He cites caselaw about marriage being a fundamental right under the Due Process clause. And he explains that sexual orientation is a suspect class under the Equal Protection clause–and that infringement of the right to marry under that clause fails to pass what is, in the Tenth Circuit, rational-basis review (under Price-Cornelison v. Brooks, 524 F.3d 1103 (10th Cir. 2008)).

But Shelby is not alone in using Scalia’s unlikely, unbelieved prophecy against his cause.

Obergefell v. Wymyslo, an Ohio case from December 23 that ordered a same-sex spouse’s name be listed on a state death certificate, similarly starts with Justice Scalia.

This conclusion flows from the Windsor decision… which held that the federal government cannot refuse to recognize a valid same-sex marriage. And now it is just as Justice Scalia predicted – the lower courts are applying the Supreme Court’s decision, as they must, and the question is presented whether a state can do what the federal government cannot–i.e., discriminate against same-sex couples … simply because the majority of the voters don’t like homosexuality (or at least didn’t in 2004). Under the Constitution of the United States, the answer is no, as follows.

Judge Black does engage in his own due process and equal protection analysis. But again, in Obergefell as in Kitchen, the rationale behind a significant expansion of same-sex marriage rights begins with Justice Scalia.

In Windsor, Scalia invites lower courts to examine Windsor’s “scattershot rationales,” and “take the Court at its word and distinguish away.” But neither Shelby nor Black do distinguish between the facts at bar in Windsor and in their cases. Why should they? If same-sex couples are to be treated equally under federal law, why or how is the Fourteenth Amendment to be distinguished?

None of this is to suggest that Scalia is a fan of gay rights. As he argued in Lawrence v. Texas, a plurality of the people in this country do not want LGBTQ people to be their business partners, their children’s scoutmasters or teachers, or boarders in their homes, and that continuing that plurality’s right to discriminate against LGBTQ people serves to protect that plurality “from a lifestyle that [it] believe[s] to be immoral and destructive.”

More recently, in an October interview in New York magazine, he denied that his personal position towards homosexuality had softened.

Even so, if the enemy of my enemy is my friend, is not the friend of his enemy’s arguments–even if only rhetorically so–a friend of that enemy? Justice Scalia has deftly sketched the arc of progress. He will either embrace change… or be consigned to the dustbin of history.