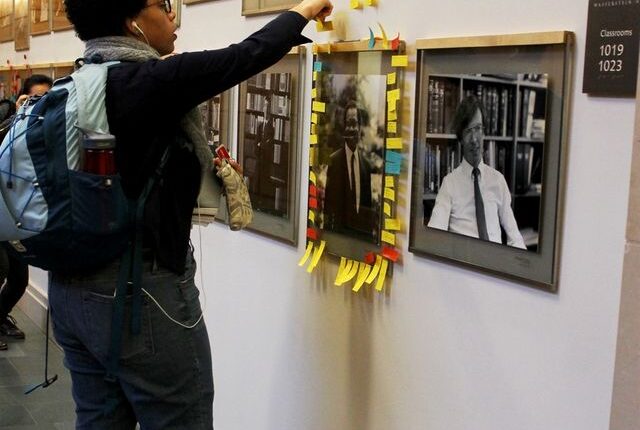 We are witnessing an alarming trend across the nation, where overt acts of racism and dismissive responses to racist conduct continue to plague institutions of higher learning. As officials launch an investigation over last week’s hate crime incident at Harvard Law School, the Society of American Law Teachers (SALT) condemns this and other attacks against diversity in legal education.  On November 18, 2015, the portraits of African American Harvard Law Professors that line the walls at the school were defaced with black tape across their images. The incident happened a day after students from Harvard and nearby schools participated in demonstrations to show support for Black activists on campuses nationwide. But the Harvard incident is just one example of recent troubling events.

As students assert their rights to participate in demonstrations and promote dialogue around race, SALT reaffirms its longstanding commitment to diversity and social justice, particularly as it impacts education. We stand in solidarity with the students, faculty and staff in academia who take a stand against racism and other forms of discrimination.

SALT calls on universities and other institutions to:

·       Critically examine the symbols of discrimination that exist in their midst that may foster a racially hostile environment;

·       Engage in dialogue with affected constituencies to ameliorate the damage already caused by racially charged incidents;

·       Reaffirm the rights of students to engage in demonstrations challenging racialized injustice;

SALT will continue to advocate for diverse educational environments through our BA-JD pipeline events, amicus briefs, and the work of our members at more than 200 law schools across the country.

Founded in 1974, the Society of American Law Teachers has members at more than 200 law schools throughout the country.  Visit our web site at saltlaw.org.