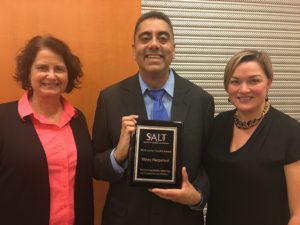 SALT proudly recognized Professor Vinay Harpalani as the 2016 Junior Faculty Teaching Award winner at its Teaching Conference reception on September 30.  The award recognizes an outstanding recent entrant into legal education who demonstrates a commitment to justice, equality and academic excellence. It is designed to honor an emerging teacher and support an outstanding individual new to the legal academy. This award also recognizes law teachers who exemplify SALT values though SALT membership and participation in SALT activities. The award will be given at the SALT Annual Members Meeting, to be held in conjunction with the SALT Teaching Conference, at The John Marshall Law School, Chicago, Illinois, on September 30, 6:15 p.m.

Professor Harpalani was selected from a field of highly deserving nominees for his outstanding record of commitment to social justice, diversity, and access in his teaching, scholarship and service. Throughout his career as a law professor, Professor Harpalani has taught a wide variety of courses, including Constitutional Law, Civil Procedure, Employment Discrimination, Education Law, Critical Race Theory, and Legal Writing. One nominator wrote that: “In each of these courses, he pushes his students to consider the hard questions about law, not only about how the doctrine should or can be interpreted, but also about how the law works to reify disadvantage and how it can be utilized to begin to eliminate inequality.”

Professor Harpalani uses creative techniques to incorporate these themes in his courses.  Having learned directly from the late Professor Bell when Professor Harpalani served as the last Bell Teaching Fellow, Professor Harpalani employs many of the same creative approaches that Bell used in his classes at Harvard and NYU:  oral arguments, group discussions, practice problems, and other forms of active learning.

In addition, Professor Harpalani has been steadfast in his commitment to fight to preserve affirmative action.  As a legal scholar, he has written several articles on affirmative action, particularly regarding the Fisher case, including:

Diversity Within Racial Groups and the Constitutionality of Race-Conscious Admissions, 15 U. PA. J. CONST. L. 463 (2012).

Beyond admissions policies, his articles argue that universities should promote race-consciousness broadly—by incorporating it in their classes and other educational activities.

Finally, Professor Harpalani has been dedicated in his service. In the past three years, Professor Harpalani has served on the SALT Affirmative Action Committee, written an issue brief defending race-conscious admissions for the American Constitution Society, and advised the NAACP Legal Defense Fund and other groups on legal defenses of affirmative action.  He has been nominated to serve on the SALT Board of Governors on the slate to be considered by the membership on September 30.  In all of these ways, his teaching, scholarship, and service directly support social justice advocacy.

We congratulate Professor Harpalani and his institution, Savannah Law School!