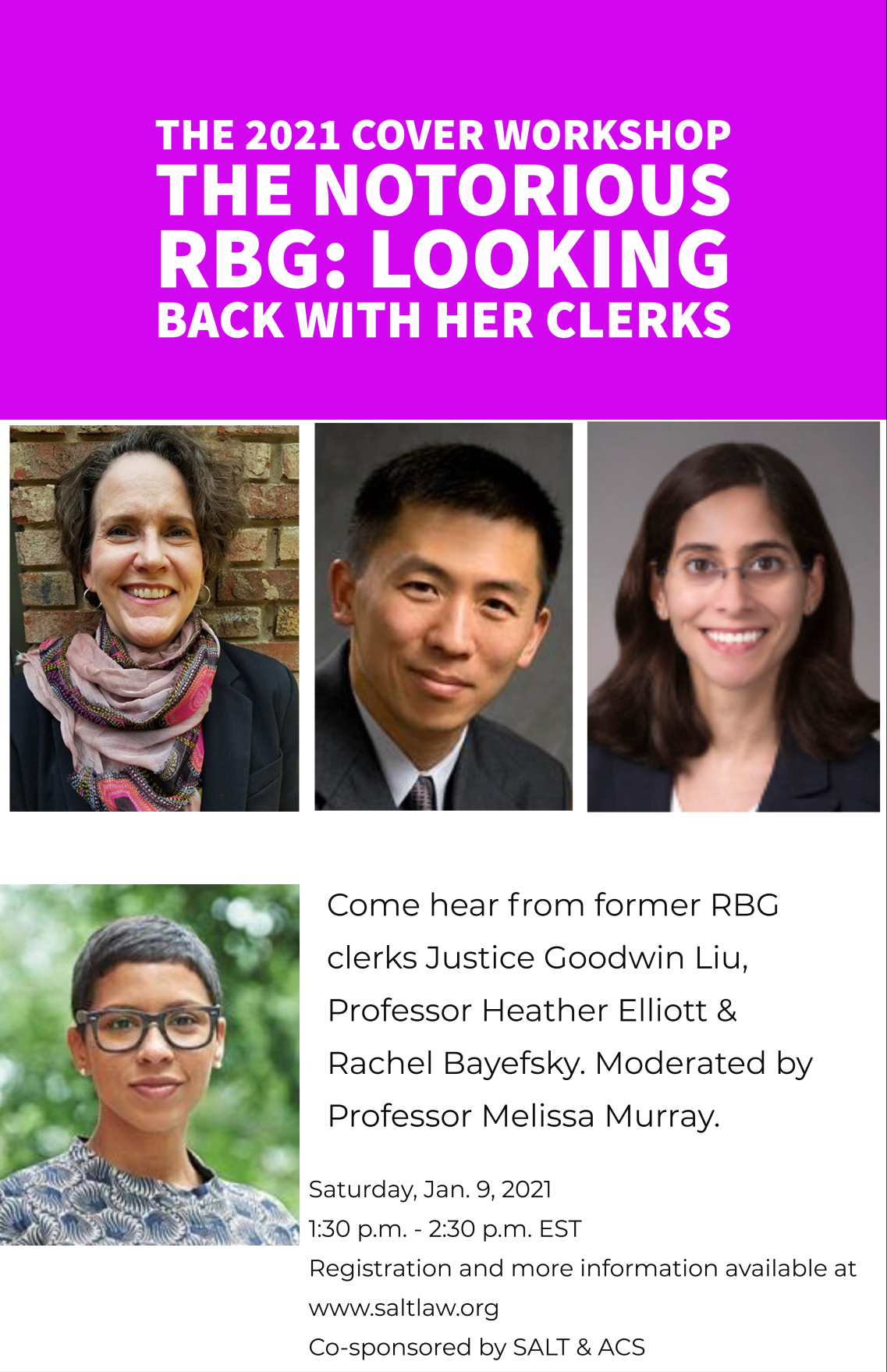 The Notorious RBG: Looking Back with Her Clerks

The panel discussion was moderated by Melissa Murray, Frederick I. and Grace Stokes Professor of Law and Faculty Director, Birnbaum Women’s Leadership Network at New York University School of Law, who served as a clerk to then appellate court judge Sonia Sotomayor when she was still on the Second Circuit (2003-2004). Professor Murray brought her own insights into the judicial process to inform the discussion.

Joining Professor Murray was Associate Justice Goodwin Liu of the California Supreme Court. He was nominated to the court by Governor Jerry Brown and retained by the electorate in the 2014 election for a term that ends in 2027. Justice Liu clerked for Justice Ginsburg during the 2000 Term, when the Justice dissented in Bush v. Gore.

Heather Elliott is the Alumni Class of ’36 Professor of Law at the University of Alabama School of Law and a SALT board member. She clerked for Justice Ginsburg during the 2001 term – notable for 9/11 and anthrax rather than blockbuster opinions – after clerking for Judge Merrick B. Garland of the United States Court of Appeals for the D.C. Circuit.

Rachel Bayefsky is an associate at Akin Gump Strauss Hauer & Feld LLP. She clerked for Justice Ginsburg during the 2018-2019 term when her health challenges never interfered with her work and her relationships with clerks.

As legal professionals we understand the importance of the Supreme Court within the constitutional framework, but we might not fully comprehend how an individual justice can affect the dynamic of the judicial process, especially at the Supreme Court.  Each year that she served, Justice Ginsburg wrote decisions that were rarely joined by her closest friend on the court, Associate Justice Antonin Scalia.  How did such disparate ideological colleagues find friendship?  What RBG lessons did these former clerks take with them into their own careers, to their students, and to their colleagues? Are there any insights into how RBG actually felt about her important record of dissents?

Part scholarship and part personal recollection, this was a conversation about the Notorious RBG with those who loved and admired her.